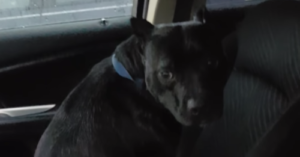 A man was just sitting in his car on a rainy day when a hungry Pit Bull approached him and peeked in the open window. It is clear that the dog could smell food, so the man asked, “do you want something to eat?” To the man’s surprise, the dog took his offer as an invitation. The dog jumped into the car through the window, making himself right at home.

While this dog appeared to be wearing a blue collar, he had no tags on. So, even if he wasn’t a stray, the man had no way of contacting the dog’s family. The poor Pit Bull was wet and so hungry that he was willing to jump into the window of an unfamiliar car. Therefore, it is likely that he had no one to care for him.

When jumping into the car, the dog’s back legs got caught on the window at first. The man and his passenger screamed and laughed at this ridiculous scene, unsure of what to do next. Once the man calmed down a bit, he helped the dog away from the window, and the dog immediately sat down in the passenger seat.

The dog did not look for food right away. Instead, he just sat there as if to catch his breath. Sitting in the car, the dog looked like he was meant to be there. He also didn’t seem to be planning to get up anytime soon.

After the dog got situated, the man asked again if he would like some food. This time, the man grabbed a snack and stepped out of the car, hoping that the random dog would follow.

However, to his surprise, the dog stayed put. The dog’s back was facing the man, and he looked over his shoulder with sad puppy dog eyes. As much as the man wanted the dog out of his car, he couldn’t help but laugh.

While this poor dog jumped into the car at the sound of food, it appeared that he was looking for more than just something to eat. He had found a nice place to rest and he did not want to leave. This isn’t something that you see every day, but once you offer a dog food and let them under shelter, you’ll have a hard time trying to get rid of them. How could you say no to that sweet face though?

See the whole, hilarious video here (turn your sound on!):

The post Watch What This Hungry Pittie Does When A Stranger Says “Eat” appeared first on iHeartDogs.com.