When Benji was a young Lab puppy, he had a lot of anxiety. His dad, Russel Teck, felt bad for his poor puppy, so he wanted to find an activity that could help Benji.

At first, Teck considered agility, but it just didn’t seem like Benji’s thing. Plus, he didn’t have space in his yard for an agility course. So, after further research Teck discovered the perfect job for his nervous pup: a therapy dog!

Benji went through a year and a half of therapy dog training, and in the end, it all paid off. In 2014, he passed his test for Therapy Dogs International on his first try! Benji was ready to make a difference in the world. 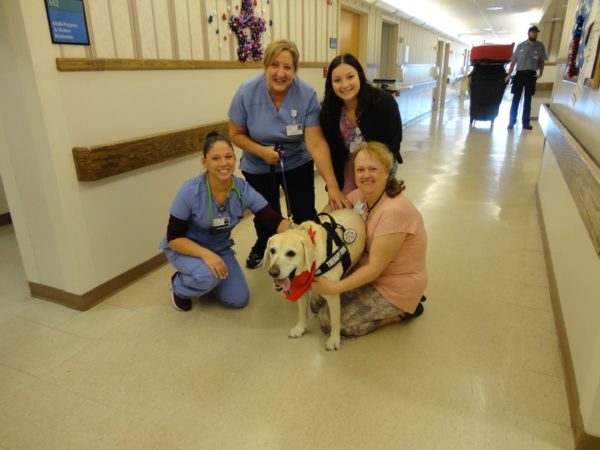 “I watch a lot of dog shows on TV and therapy dogs came up a couple of times, so I started doing research into it to see what’s involved. And I thought, ‘I’m going to try it,’” said Teck.

Once Benji was certified, Teck came up with the idea to create business cards for his sweet dog. He creates the cards on the computer and then prints them out for Benji. 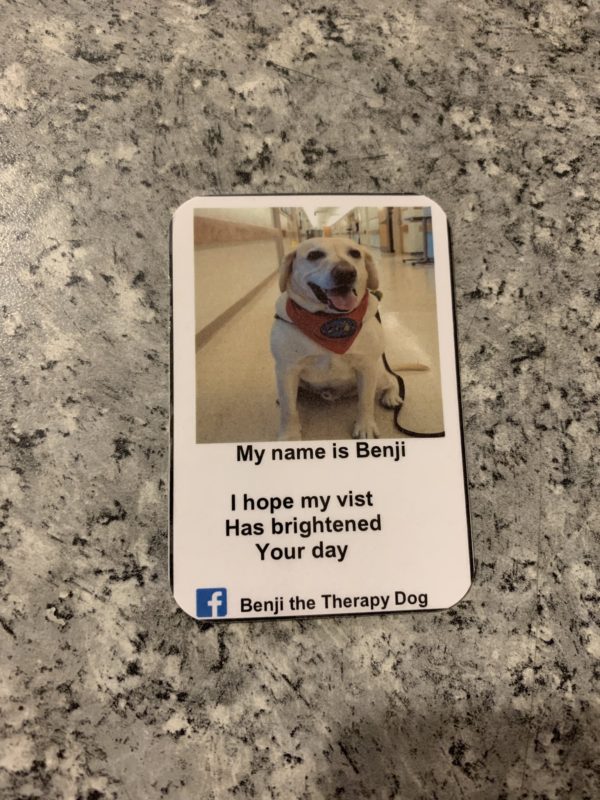 On the front of the card, there’s a photo of Benji, and it reads: “My name is Benji. I hope my visit has brightened your day.” On the back of the card, there is some additional information about Benji such as his birthday and the names of his two Pug brothers, Kevin and Kobi.

When Benji comes to cheer people up, he gives them his business card. So, many people know him very well and they are always excited to see him. A lot of the people Benji has visited hold onto his card. People often tell Teck that they keep his card on their fridge or in their wallet because it always brings a smile to their faces. Benji loves to cheer up everyone in need. He has visited nursing homes, hospitals, high schools, and funeral homes. His visits always cheer people up. Benji has visited over 1,000 places so far, and he plans to help many more people in the future.

Teck is very grateful for all the positive feedback that he and Benji have received. However, he says that even though there is a lot of joy in what Benji does, there is also a lot of hardship. Part of cheering people up is about hearing their stories and feeling their pain. “You get attached to a lot of people and when they pass away that’s the hard part,” Teck said. “I try to take him to the funeral home for each one of them — the families always thank me for bringing him. It’s really touching.”

Teck accompanies Benji on all of his visits. Not only has this role changed Benji’s life for the better, but Teck says that he thinks it’s his own purpose too. He loves how much Benji can cheer others up and he is so proud to be known as “Benji’s dad.” The post Therapy Dog Introduces Himself With Business Cards appeared first on iHeartDogs.com.