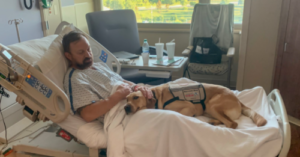 He wakes Moore up when he has nightmares, provides physical support when he’s dizzy, and even turns lights on for him when he enters rooms. Kevin’s help allows Moore to feel more comfortable in public places. He lets him feel safe.

Moore’s wife, Dawn, told The Washington Post how important the dog is to the family.

“We call him ‘Kevin the wonder dog.’ He’s always wondering, ‘What can I do for you?’”

Kevin has even stayed with his person in the hospital after surgery. He’s extremely attentive and to say the least, great at his job. In short, Kevin has changed Moore’s life. 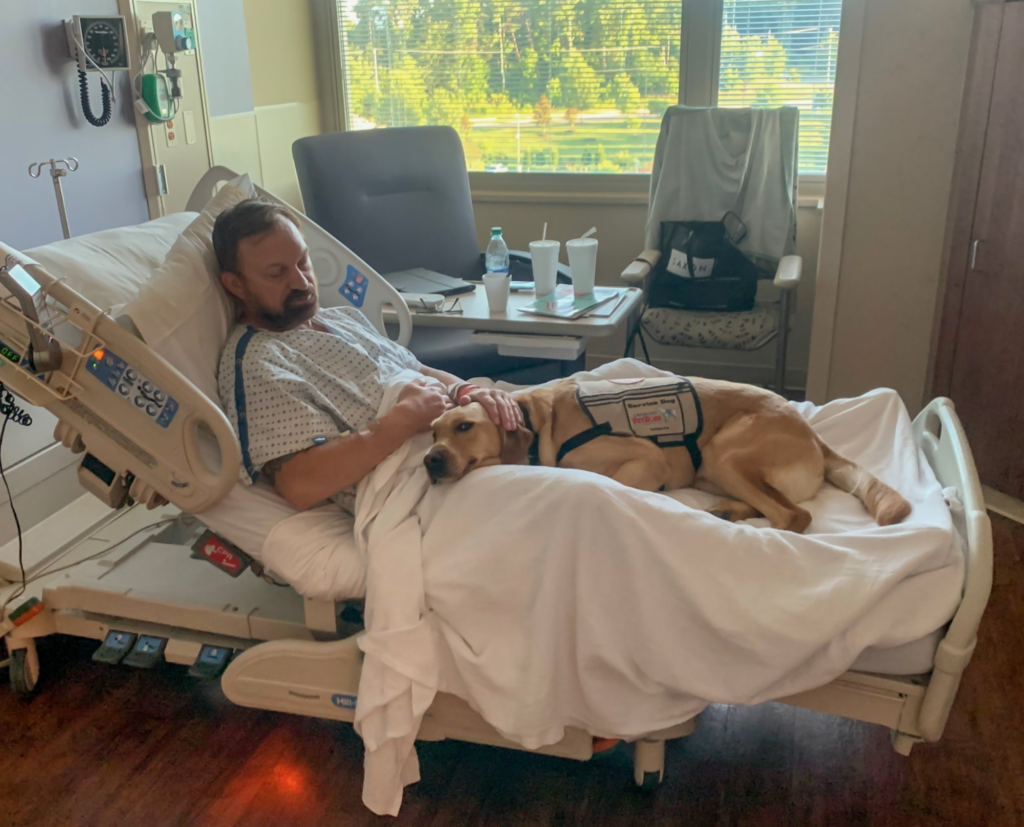 Moore isn’t even the only person whose life was changed for the better by Kevin ‘The Wonder Dog.’ Kevin did the same thing for an inmate at the Western Correctional Institution in Maryland.

That inmate’s name is Herbert Wilson-Bey and he’s the person who trained Kevin to become a service dog since he was a 6-week-old pup. Wilson-Bey is part of a program that’s a collaboration between America’s VetDogs and the Maryland Department of Public Safety and Correctional Services. The program, in which inmates train future service dogs until they’re ready to pair, originally began in 2012 as an effort to focus on restorative justice.

Programs like this are said to rehabilitate inmates as they train dogs to help others. The trainers also reap the therapeutic rewards of hanging out with pups. Wilson-Bey, now 44-years-old, has been incarcerated since he was 17-years-old. He’s never held a job before, and training the dogs is one of his first real responsibilities, according to him.

He joined the program in 2013 because he wanted to give back.

“You are always working, but it is joyous work. It’s like, if I put all my heart into this puppy, they are going to come out and be able to help someone.”

“In this special program, inmates are raising and training puppies who will one day work as service dogs for wounded veterans. In many facilities, incarcerated veterans are participating in the program giving them an emotional connection to their dog’s future handler and partner.”

The dogs are with their assigned inmate handlers all day every day Monday through Friday, but they spend weekends with outside volunteers to acclimate to life outside the prison. After they graduate from the prison training program, they train for 3 more months with America’s VetDogs. The organization flies in Veterans and houses them for two weeks while they work directly with their new service dog. America’s VetDogs spokeswoman Sheila O’Brien told The Washington Post the costs of breeding, raising, training, matching, and supporting a service dog are over $50,000.

The organization largely relies on donors, which you can become here! Seems like a good way to positively impact at least 3 lives if you ask me.