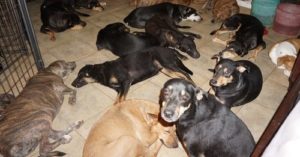 Most of us cannot imagine having seven dogs in our home, let alone 97! Chella Phillips lives in Nassau, Bahamas where she devotes her life to rescuing local street dogs, affectionately known as “potcakes.”

When she got word of Hurricane Dorian, Phillips gathered up as many pups as she could before the massive category 5 storm. She ended up with 79 dogs in her master bedroom, and 18 more throughout the house.

“It was either leave the dogs on the street to fend for themselves…or do something about it,” Phillips told ABC News. “I just want these dogs to be safe. I could care less about the dog poop and pee in my house.”

Dorian is one of the most powerful storms to ever hit the Bahamas. It caused five deaths as well as massive property damage and flooding.

Phillips and the pups in her care lost power, and water entered the house at one point; but overall they were lucky.

“We are alright after a stressful night,” she wrote in a Facebook update. “All services are down, all TVs are fried from the lightnings so no more cartoons for the sick dogs until we can purchase new ones.”

“I don’t see how any dogs or any living being could have survived outside,” she continued. “My heart goes out to them. Thank you for the outpouring of support and heartfelt prayers.”

Phillips’ viral Facebook posts helped bring attention to her rescue, “The Voiceless Dogs of Nassau, Bahamas” which takes in homeless, abandoned, and abused island dogs. They have also helped renew interest in an online fundraiser benefiting the refuge.

Although the campaign is unrelated to Hurricane Dorian, publicity from the viral story has given it an unexpected boost. As of Tuesday afternoon, supporters had donated more than $88,000—far exceeding the original goal of $20,000!

Since she began Voiceless Dogs, Phillips has helped about 1,000 dogs, many of which have gone on to wonderful new lives in the United States.

The post Rescuer Opens Her Home To 97 Dogs During Hurricane Dorian appeared first on iHeartDogs.com.