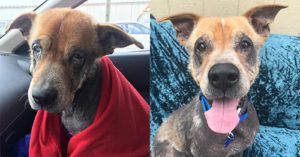 At a glance, you may not always be able to tell that a dog has been neglected. You may see big, brown eyes and a wagging tail, you might even see some protruding bones, broken teeth or scars. What you don’t see is a broken heart carefully mended back together by staff and volunteers who only wanted to let a pup know that someone loves him. Some dogs will put their pasts behind them and you’d never guess where they started.

But unlike other neglected dogs, Dakota’s story is written all over his body. 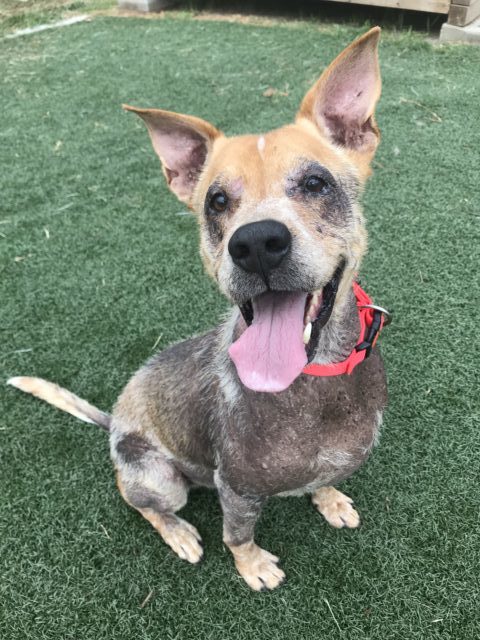 This week is National Adopt a Less Adoptable Pet Week. We’re focusing on the pups who waited patiently while they watched other kennels around them clear and fill up and clear out again. And we’re celebrating the heroes who saw past the grey fur, missing limbs, or the scared behavior that marks a dog as “unadoptable.” The people who open their hearts and homes to the pets who need them most.

Right now, Dakota is waiting for a hero. He was wandering around a job site in Houston, Texas for over two months last winter, living on the kindness of the people working there. He appeared to have severe mange and his eyes were crusted over, but he was sweet and would let people approach to feed and pet him. Workers attempted to get help from animal control and the local SPCA, but hadn’t had any luck. Finally, they put a plea for help on Facebook. Someone tagged dog lover and animal rescuer Alaina Rosenblatt, and without hesitation she answered the call.

Update: Alaina Rosenblatt is rescuing the puppy in the morning!! We need a foster still. This sweet boy will be rescued…

The very next day she went to get him as soon as the gates to the job site were unlocked. She had seen the pictures online but was still shocked when she met him in person. Alaina gently put him into her car, wiped his poor eyes with a tissue, and wrapped a blanket around his skinny body. A trip to the vet determined that Dakota did not have an active case of mange. The truth was even sadder. At 11 months old he had been on the streets, malnourished and exposed to the elements for so long that most of his coat was gone, and it will not grow back. Tammy Johnson with Second Family Pet Service tells iHeartDogs,

“Dakota was so exhausted when he got to me, but he was terrified. Terrified of other dogs and people, which is common for a street dog that has had to make it on his own for so long. He was weary and skittish.

“By the end of the day, considerable hot dogs had earned his trust. Finally he crawled up on the couch in the kennel. My 11 year old daughter had been sitting there hoping to have him come over. She covered him with a blanket and within seconds of being in her lap, he immediately fell asleep. The first safe and comfortable sleep he most certainly had in a very long time.” Even with a big heart eager to love, most people looking for a dog will want one with a furry, soft body and won’t give a pup like Dakota a chance. But just because he’s “less adoptable” doesn’t mean he’s unlovable. The people at Houston K-911 Rescue knew it wouldn’t be easy, but they took on the challenge of helping him find his home.

Houston K-911 Rescue is no stranger to cases like Dakota. They do their absolute best to give every dog a chance at a happy life and a good home. They made news last year when they rescued Gus, whose face was swollen after someone tied a shoelace around his neck so tight it was embedded into his skin. They were more than willing to help Dakota, too.

“Dakota made it because of Houston K-911,” says Tammy. “It’s very difficult to find a rescue that will take on a dog like Dakota, but that is what has made Houston K-911 the most respected rescue in Houston. They accept the most difficult cases, all of which come directly from the Houston streets; they are unique in that. They pay for medical and boarding. They keep close tabs on him. Without them, Dakota, at best, would have found his way to the shelter where he would have most certainly have been euthanized.

“Dakota is just such a wonderful dog and is always over looked. Eight months he has been waiting on a family of his own!” 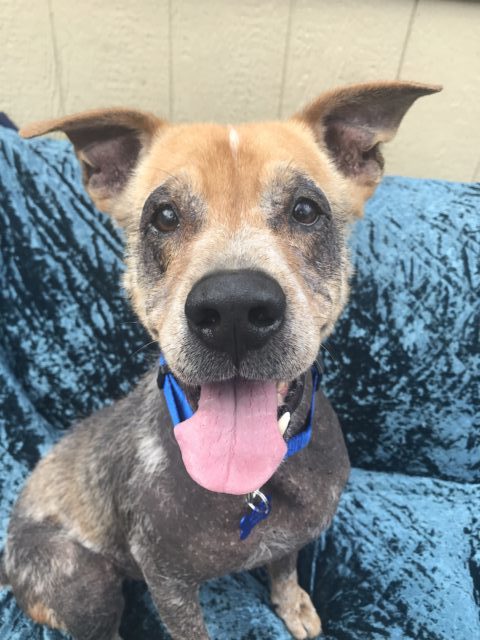 “Despite his rough start, he is endlessly sweet and affectionate. He is completely undaunted by his former street life. He’s confident, friendly and exceptionally intelligent. Dakota is a friend to all, grown ups, kids and other dogs (except cats.) He’s socialized, crate and leash trained and knows basic commands. He also loves car rides! He’s inquisitive and always up for an adventure.”

Dakota’s skin requires a little extra care, and he needs eye drops to treat permanent dry eye a few times a day – but he’s such a good boy and took to training so well that his foster says that giving the drops is a breeze with a few treats and love!

His rescuers have already fallen in love with Dakota, but they want to give him the best gift they can – a family of his own.

“Dakota needs a person who will put little sweaters on him every day. One who will give him warm baths, chicken and rice and coconut oil rubs. Someone who understands what’s it’s like to be discarded.”

Dekota NoCoata has come a looooooooong way since he has been with us. Though none of us can figure out why he refuses to sprout hair, we are thrilled to say he is no longer “dog aggressive.” He’s still pretty selective about who he plays with (you would be too if you got your ass kicked on the street every day), he’s definitely thriving. He’s ready for his First Family. If you would like to learn more about Dekota, please reach out to Houston K-911 Rescue.

You can expect some uncomfortable glances from people who don’t understand, but also soft sweaters, wet kisses, and a lot less dog hair than you’d usually find on your clothes.

If you’re ready for a good life like that with a wonderful dog like Dakota, get in touch with Houston K-911 Rescue to ask about him!

The post Pup Who Lost His Fur To Neglect May Be “Less Adoptable,” But Not Unlovable appeared first on iHeartDogs.com.