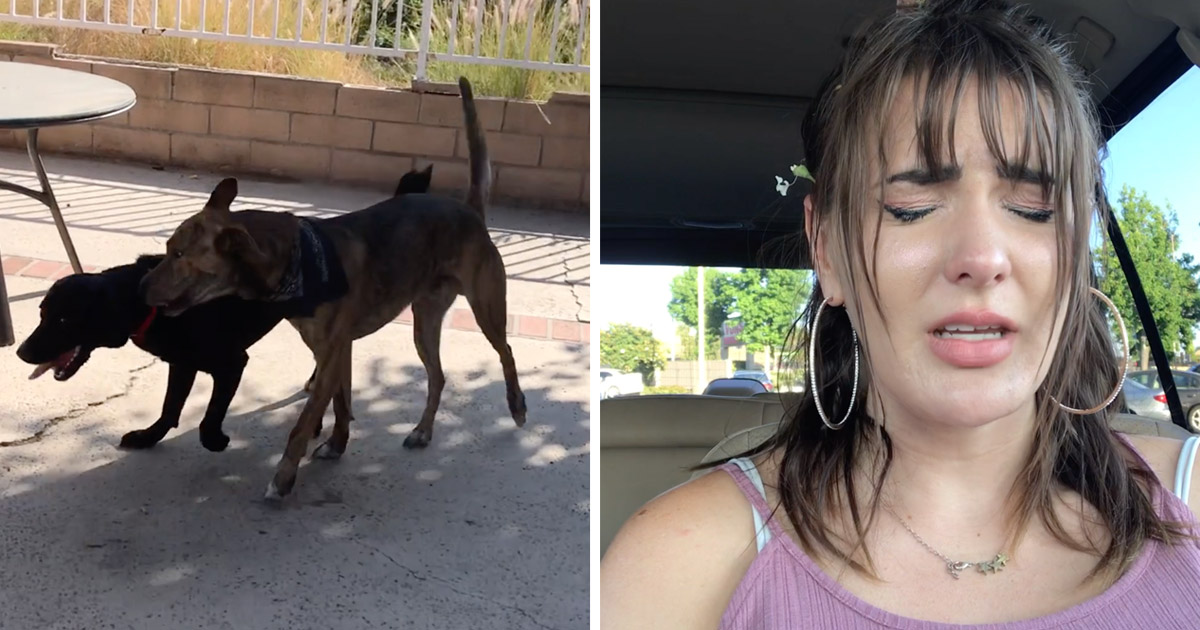 One Dog Mom Shares A Harrowing Story About Collar Strangulation

“Ever since Milo was a small puppy, Jesse our older dog would nuzzle Milo’s face, play growl, and bite Milo’s collar (I think he was trying to show him who’s the boss around here). The two of our dogs are inseparable playmates. Milo had just turned one this Spring, and I bought him a beautiful new teal dog collar from my local pet store for his birthday, adorable bow tie included.

I didn’t know it yet, but I made a mistake. One day I left for work just like any normal day, and I received a horrifying text from my mom who was watching them, her text said, “Hey, everyone’s OK, but Milo almost died today.” After that I left work immediately to check on my fur baby. My mom told me EVERYTHING, and I was shocked.

Milo and Jesse were play fighting as they always do, and Jesse’s jaw got stuck. His jaw was latched securely underneath Milo’s collar and he was unable to escape. Jesse is a muscle dog, and he pulled with all of his strength terrified because he was stuck. Poor Milo was crying and yelping out for help! My Mom tried to unlatch the collar, but she was couldn’t over power the strong, big dogs.

My mom starts yelling for my brother in the other room, “THOMAS! THOMAS! THE DOGS, HELP!” (Thank God my brother was home.) In a panic she continued, “Grab a knife! We need to cut the dog loose from Milo’s collar!” Milo was struggling to breath.

My brother came rushing into the room and he had a pocket knife ready to cut the collar off. However, he didn’t need the knife!

He was able to straddle Jesse and calm him down enough to get him to stop pulling. My brother says some miracle the collar’s latch unhooked. The dogs were safe. Milo laid on the floor recuperating from the situation for 20 minutes before being his normal self again.

His new birthday collar I had got him from my local pet shop was his own death trap. I mean, what if my brother wasn’t home? My mom would not have been strong enough to calm down two 60lb+ dogs. I thank my lucky stars every day that my dogs are healthy, happy, good boys.

Everything went back to normal, and I kept the collar off of my dog while I wasn’t home (unless we were on a walk). A friend of mine suggested that I get a breakaway collar. I was like, “A what-what-collar?”

I went home and I did some research and decided that’s the ONLY collar I want my dogs to wear. Why? Well, if that ever happened again, I wouldn’t fear my dog losing his life because he would be able to break away on his own. At a very strong tug, the collar will unlatch itself.

Now, I never have to worry about him getting his collar stuck on a branch, gate, another dog’s mouth, or some other things that could strangle my poor dog again.”

Note from iHeartDogs Team: Surprisingly, over 20% of dog owners report that their dog has had a near strangulation event at one time in their life. Because of these statistics, we’re passionate about collar safety education! When a dog’s collar becomes entangled with another dog or stuck on something, it could be a life threatening situation. If you do keep a collar on your dog everyday, we’d encourage you to look into using a breakaway collar.

The post “People don’t realize how deadly dog collars are. I hope my story changes their mind.” appeared first on iHeartDogs.com.

Dogs are having hilarious reactions to this ‘disappearing’ trick

ALL TIME MOST POPULAR

ABOUT US
All Dogs Lovers is a website that share dog stories, videos, funny and photos... with dogs lovers and community.
FOLLOW US
© 2018 - All Dogs Lovers