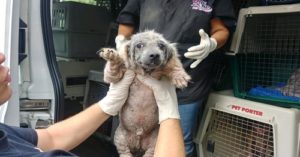 Animal hoarding is a terrible phenomenon. Vice reported that there are between 900 and 2,000 cases every year in the United States, affecting around 250,000 animal victims. In many cases, however, the people who hoard animals have certain mental conditions and believe that they’re helping the animals.

Animal hoarding, after all, isn’t just having a lot of animals at home if they’re all properly cared for. Hoarding by definition requires a person to be unable to properly house or care for their animals which can lead to neglect, disease, and death.

This is the sad story behind a hoarding situation in southern Ohio. A good samaritan had been taking in stray dogs dropped off at his home. Eventually, he became in way over his head without the help or finances necessary to care for this many dogs. Ultimately, this led to unsafe conditions for the dogs.

The shelter near the home simply doesn’t have the budget or staff necessary to care for this many sick dogs at once, which is why an Akron, Ohio based rescue, One Of A Kind Pet Rescue, stepped in. OOAKPR sent literal truckloads of volunteers to southern Ohio. They ended up taking in over 45 dogs.

URGENT PLEA!! EMERGENCY CASE!!!! This weekend, staff and volunteers from OOAK will travel to rural Ohio to rescue 45+…

The photographs of the rescued dogs are upsetting to say the least.

According to OOAKPR, some of the dogs had contracted sarcoptic mange and infected all of the dogs. Also known as “scabies,” these are mites that burrow deep below the skin and make dogs severely itch and lose hair. It can also be transferred to people. Sarcoptic mange is treatable,  but treatment is expensive.

Mission complete. All dogs collected, accounted for, and ready to start their road to recovery ❤️

The Rescue took to posting on Facebook and called for help of all kinds, from crate donations to money towards the cost of the dogs’ treatment. Fortunately, this was a very effective tactic. People from all over the country responded to the post. One kind soul even donated space for OOAKPR to house more of the recovering dogs. So far they’ve raised over $7,000.

Still, Mauresa Tosatto, the rescue’s dog manager, told Ohio.com this case is costing the shelter at least $200 a day in medical expenses.

There are no words to describe what took place at One of A Kind today. We laughed. We cried. We vomited. Some of us…

The large scale rescue is on top of the 150 to 184 dogs OOAKPR already takes in every month. The organization has about 60 full and part-time employees and dozens of volunteers, but they plan to hire two more to help with the volume.

While the dogs recover, they’re not available for adoption. The Rescue announced that once the pups are ready, they’ll be holding a big Adoption Party. So if you’re in the Ohio area, I can’t imagine you’ll ever go to a better party than that!

You can also follow their page @OOAKPR on Facebook to see updates on the dogs’ condition and availability, or just to help them out with those crazy costs.

The post Over 45 Dogs Rescued From Hoarding Situation In Ohio appeared first on iHeartDogs.com.