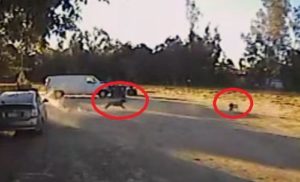 You’re about to see one of the most watched and shared videos we’ve ever posted.

The following video was taken by a security camera. Despite living in an area with no prior reported Coyote activity, this owner’s dog was in a fight for it’s life after being left alone for 5 minutes outside. At 7 in the morning, Trixxie (a chi-weenie) was attacked and carried off by a Coyote. The poor little dog would’ve lost her life if not for the Rottie that came to her rescue. Happy, the Rottie who was a neighbor’s pup, quickly went after the Coyote when she saw that Trixxie was being attacked. Once Happy intervened, Trixxie was able to get away. Watch the incredible video below:

Trixxie is so lucky that Happy came to her aid! Her BFF saved her life! (For more details about the video, read the description on Youtube)

The post Neighbor’s Rottweiler Springs Into Action After Small Dog Is Carried off by a Coyote appeared first on iHeartDogs.com.