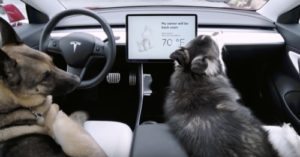 Of course, no one wants to leave their dog alone in a car, especially on an extremely hot or cold day. However, with Tesla’s Dog Mode in the Model S, you no longer have to worry about your furry friends being in danger while they wait. It even displays a screen to notify others that the car temperature is controlled.

Unfortunately, Ross Hunt still ended up getting in trouble for keeping his dog in the car on a hot day. He had Dog Mode on, but he was still charged for animal cruelty. 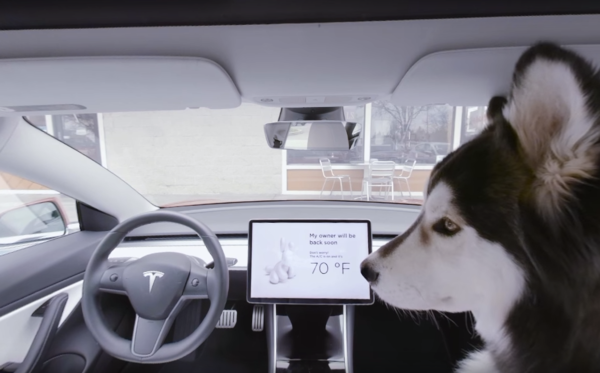 Hunt left his Poodle, Loki, in the car while he attended a lunch meeting at Roly’s Bistro in Ballsbridge, Ireland. He made sure that Dog Mode was on before leaving his furry friend alone. However, a person that walked past saw Loki in the car and immediately called the police.

When Hunt spoke to a representative from the Dublin Society for the Prevention of Cruelty to Animals, he explained the dog feature to them. He had been able to monitor the temperature of the vehicle simply from an app on his phone. The car was set at 20 degrees Celsius, or 68 degrees Fahrenheit. Therefore, Loki was completely fine in the air-conditioned car.

On top of that, Hunt’s car had displayed this information on the dashboard screen for those outside to see. The screen reads the temperature in the car and it states that the dog’s family will be returning soon.

However, even after explaining this, Hunt was still charged with violation of the county’s Animal, Health, and Welfare Act. Hunt knew he had not harmed Loki in any way, so he pleaded not guilty. Hunt actually cares for animals on a daily basis. He runs an AI company that monitors the well-being of farm cows in North America. He used this information to further prove his ability to care for animals. Luckily, after further consideration, the judge dismissed the charges against Hunt.

“It was quite clear that he was a very loving, responsible, and caring dog owner,” said Judge John Brennan.

Tesla’s Dog Mode is a newer feature that came out in February 2019. Technically, it is an extension of the Overheat Cabin Protection feature. This previous feature would run the A/C or heater if the inside of the car ever got too hot or too cold. However, the Dog Mode is a much safer and consistent feature.

Hopefully, this type of feature will become more common for cars in the future. Plus, if more people are aware of it, less pet parents will have to go through the situation that Hunt was faced with. This feature can help all dogs to stay safe while their humans run errands, so it is definitely a valuable mechanic to have. The post Man Left Dog In Car. Accused Of Animal Cruelty Even Though Tesla’s “Dog Mode” Was On appeared first on iHeartDogs.com.