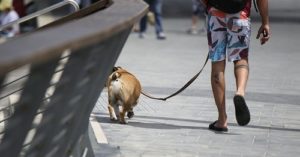 A California dog dad got a shocking surprise when a motion alert from his home security camera appeared on his phone. He watched in horror as the pet sitter he hired through the Rover app violently threw his puppy, Lucy to the ground.

Lucy was seen by a veterinarian, and is expected to be fine, but it certainly raises questions as to the safety of using pet care apps such as Rover and Wag.

Warning: The video footage is very disturbing. Proceed with caution.

Wag and Rover are often compared to “Uber for dogs” due to their ease of use. But fast and convenient may not be good things when it comes to the care of your beloved pup.

In April, CBS News reported the death of a blind senior pooch named Mooshu who fell from a two story porch while in the care of a Rover pet sitter. The owner was offered $2,600 towards the cost of Mooshu’s vet bills and cremation as well as the cost of a new dog, if she signed a non-disclosure agreement.

She declined and became one of 14 families to speak with CBS about the deaths of their dogs while in the care of Rover or Wag sitters. One dog parent discovered her Rover sitter had a criminal record, another caught her Wag walker on surveillance video kicking and intimidating her dog.

Users of both apps were asked to sign non-disclosure agreements after their dogs were injured or killed while in the care of Wag or Rover employees.

Rover told CBS that the well-being of pets is their “top priority” and they are “continually working to improve safety.” Similarly, Wag reported that they are “committed to constantly improving their service” and “care deeply about the safety” of dogs.

“Just pasting a badge on the website is not going to work anymore, they’re going to have to back that up with some kind of training,” Rustenback said. “If you had a child, would you just accept a person on an app to take care of your child? Or would you do more investigation? And that’s what I encourage all pet owners to do.”

The post Latest Incident Highlights The Dangers Of Entrusting Your Pup To Dog Care Apps appeared first on iHeartDogs.com.