The Kern County Fire Department serves the city of Bakersfield, California. Firefighters were called out to a house fire at the 2200 block of Pacific Street earlier this week. The property included two structures: the main home at the street and a smaller house in the back. When firefighters arrived on the scene, both were engulfed in flames.

An Unknown Number of Pets Lost Their Lives

The back house was more severely damaged than the front. Firefighters found evidence that “several” pets lost their lives in the blaze. It is unknown how many perished. The homeowners were not injured and no humans lost their lives. The responders worked tirelessly, as they always do, to put out the fire as quickly as possible.

A Surprising Discovery in the Closet

After all of the fire was extinguished, fire fighters worked their way through both houses to check for survivors and ensure no flame remained. They were thrilled and very surprised to find a living dog and two turtles hiding in a closet of the back house. The pets were rushed out and given swift medical attention. 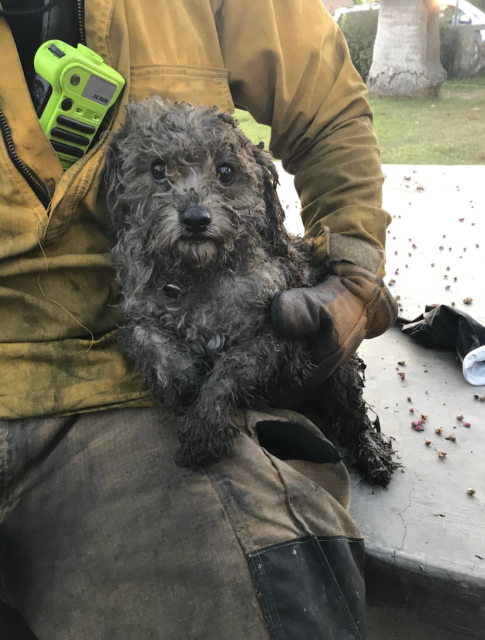 As the above picture shows, the firefighter who carried the poodle out of the house found the dog to be suffering from smoke inhalation. He placed a special oxygen mask made just for dogs over the poodle’s face to help the dog regain steady breath. The fact that Kern County Fire Department has special tools for dogs makes our heart explode with gratitude. They make the difference between life and death.

That is a White Poodle

One of the most jarring things to note about this story is the poodle that was rescued is actually white! The smart little survivor is completely coated in ash, making the dog appear black. We hope the resilient pup has since received tons of love and a nice, foamy bath. 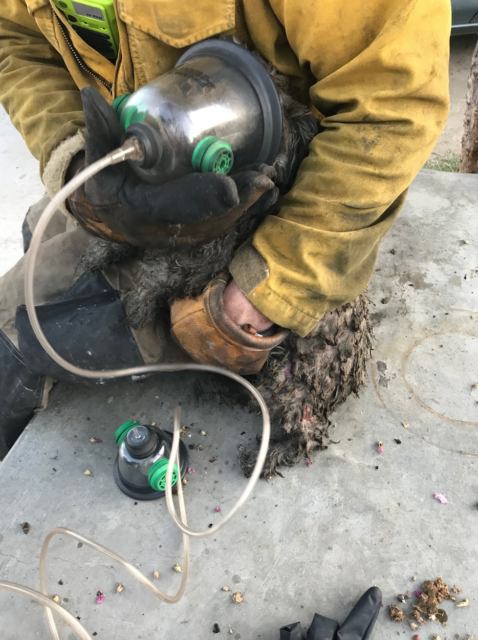 In a devastating house fire earlier this year in Baltimore, a mixed bully breed was found unresponsive inside the burning home. Thanks to a partnership with the company Invisible Fence, the Baltimore City Fire Department had pet oxygen masks on hand to treat the unresponsive dog. Invisible Fence donated more than a dozen masks sized for dogs and cats to the city fire department. It took more than 15 minutes but the dog finally came to and made a full recovery. Undoubtedly, the dog would have perished without the mask.

Our hearts ache for the animals who lost their lives in this fire, but we are so happy to hear that the poodle and turtles were saved by these real American heroes.