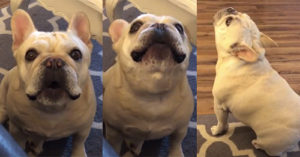 This is Cashew the French Bulldog – or “Cashew the Frenchie” on Instagram. Cashew knows exactly what he does and doesn’t like. Above all, he does not like Mondays or drinking water from steel bowls. We have on good authority (his parents) he’ll even scream about it. His interests include cheese and “steal[ing] your girl.” Oh, and farting. Lots of farting. He doesn’t look like he’s very sorry about that. We’re not sure what gave us that impression. It might be the wink.

But there’s one thing that Cashew seems to like more than anything else: Cheerios. So, naturally, when Cashew’s mom cruelly refused to give him any more of his beloved Cheerios – he had something to tell her. Well, actually, quite a few somethings. Though he’s not the first pup to get a little chatty, he is the first one we’ve seen with such an incredible passion for cereal. Someone get Cashew a marketing campaign, his passion is being wasted.

Cashew isn’t only all about the Cheerios, though. In fact, when he isn’t napping, Cashew reports to Instagram quite often about what he’s up to. Mostly things like modeling, being a loaf of bread and watching his favorite movie – The Secret Life of Pets. There’s the occasional workout, too. Or so we hear.

It’s also his page where he tells his fans about being denied all sorts of other delicious things. As if losing out on Cheerios wasn’t enough, it seems Cashew was also recently told he couldn’t have any of his Dad’s delicious “snax.” Truly, our thoughts are with Cashew during this difficult time.

Above all, Cashew is happy to eat what he can manage. This even includes his brother, Allen’s, delicious “cat snax.” We’re sure they have an arrangement. Though it seems Allen doesn’t allow snuggles from Cashew anymore. We wonder if that’s at all related.

Throwback Tuesday to when Allen used to let me snuggle himz

Life doesn’t seem too hard for Cashew, though, no matter what he says. He’s lived with his Mom since she adopted him on her birthday way back in 2015, and poses with her all over his Instagram page. Plus he posts lots of photos using his dad as a pillow. So he might be exaggerating about this prison-like treatment… just a little.

Mom is life. Am I right? 🙌🏻 What’s your favorite thing about your mom? #dogsofinstagram #frenchies #frenchbulldog #frenchiesofinstagram #dogstergram #mommasboy #ilovemyfrenchie

Be strong, Cashew. We’re sure if you keep asking, your Mom and Dad will give you some more Cheerios soon enough. Keep us updated, little buddy.

If you want to follow all of Cashew’s adventures as a model, nap enthusiast, Lady Gaga backup dancer/singer and ardent Cheerios fan, he can be found @cashewthefrenchie on Instagram. Just be sure you keep him in your thoughts the next time you eat breakfast. He’s out here suffering, after all.

The post French Bulldog Complains to His Mom About Cheerios Shortage appeared first on iHeartDogs.com.

Canine Football Fan Charms The Internet With His Concentration