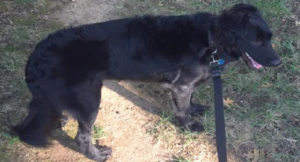 Recently, a leisurely walk through a quiet, peaceful neighborhood turned into a terrifying ordeal for a 10-year-old little girl. According to Fox 5, the horrific incident happened around 4:00 p.m. in a neighborhood in Woodbridge, Virginia. The girl was walking her dog when a man tried to abduct her in broad daylight. Fortunately, the child predator wasn’t expecting the girl to have someone looking out for her.

The man was described as 5’3” to 5’6” tall in his late teens or early 20’s. He weighed about 145 pounds and had short dark hair and goatee. According to reports, the assailant grabbed the little girl’s arm but was thwarted when her German Shepherd, Rosey stepped in to intervene and bit the man’s arm, causing him to flee the scene on foot. Talk about taking a bite out of crime!

Prince William County Police Department responded to the scene and attempted to locate the alleged perpetrator. They used K-9s to search but the area but he was nowhere to be found. Luckily, the young girl and Rosey were both unharmed.

A Rescued Dog Now Does the Rescuing

The hero dog’s dad, TJ Griffin, took to Facebook to clarify some things.

“First off, appreciate all the love here. This is my puppers and my niece in this story. I’m crazy late to this but I wasn’t aware of all this coverage and questions save for local news articles. I’ll clear up some things… Rosey is a Female Black coat German Shepard [sic] Retriever mix and was a little over a year old when this happened. She was named Rosey by my niece actually when she got adopted from Forever Home. She is very protective, playful and loves kids and the snow. I gave her all the meaty treats and a full dog spa treatment…”

Rosey was adopted from A Forever Home in Chantilly, Virginia when she was just about a year old. She was given the name Rosey by the young girl she fought to protect.

This isn’t the only instance of a faithful dog stepping in to protect their human brothers and sisters.

A four-year-old Treeing Walker Coonhound thwarted a kidnapping of not one, but four kids! Edgar scared off a would-be kidnapper from the family’s home in Pennsylvania. The man was accused of kidnapping another girl just three days before. Thom Lambert told iHeartDogs that Edgar began barking and woke up the family who was able to take action.

A Bloodhound in Rancho Cucamonga, California also helped locate a missing 16-year-old girl who had been abducted from her home. NBC Los Angeles reported a dog by the name of Deja worked with authorities to follow the scent of the girl. Deja led the team into the woods and down a path to a home where Deja then refused to leave. The girl was found inside with her kidnapper. Amazingly, she was unharmed and reunited with her family.

Besides making great companions and snuggle buddies, dogs can offer us all a sense of protection. They are loyal, caring, and would stop at nothing to keep their families safe. Let’s give a round of applause (and maybe some extra belly rubs) to our furry best friends!