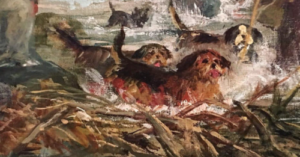 Dogs are gorgeous creatures. That’s why we fill our phones up with pictures of them from every angle doing anything imaginable (well.. at least I do.) It’s also why they’ve appeared in works of art since they first became man’s best friend.

As our relationship with dogs has evolved over the course of human history, so have the ways they inspire our art. Here are some interesting impacts dogs have had on human artistic expression over the last several thousand years.

Over 2000 years of dogs in art history (via @mymodernmet): https://t.co/VRcs6rIQKJ pic.twitter.com/DBBtSbhFpF

How Long Have Dogs Been Depicted In Art?

Dogs have inspired people for thousands of years, and there’s plenty of artistic evidence to prove it.

A mosaic of a dog was found in the House of the Tragic Poet in Pompeii, a structure built in its existing form towards the end of the first century BC.  The words written at the bottom of the mosaic, Cave Canem, basically translate to “beware of the dog.” Historians believe though that this phrase was meant to inform visitors that there were dogs inside, and not to threaten.

This mosaic is one of the oldest depictions of a dog in art history.

Dogs In Art Vs. Dogs As The Stars Of Art

Though dogs appeared in art very early on in humanity’s relationship with them, they weren’t always the focus.

In many early works, dogs were included in portraits, showing how long a dog’s companionship has been important to people. Portraits commissioned by upper-class people during the Renaissance-era often featured a dog at the subject’s side or sitting on their lap.

Dogs were also often frequently in paintings as parts of larger scenes, usually as working or hunting dogs.

As dog breeds became standardized during the 18th century, artists began creating dog portraits in which the dogs were the stars of the piece and not just workers or accessories. Eventually, dogs would also go on to become stars of drawings, sculptures, and more.

Now that dogs were no longer sidekicks in art works, they were appearing in both realist and abstract art through the 19th century. For example, you’re probably familiar with the “Dogs Playing Poker” series by American painter Cassius Marcellus Coolidge. The first painting of the series was Poker Game in 1894. It was followed by a set of 16 commissioned oil paintings in 1903, and one more completed in 1910.

Another more contemporary instance of dog-centric art are the Balloon Dog sculptures by Jeff Koons. Koons is famous for his gigantic dog sculptures.

Today, thanks to digital photography, the dog’s perfect form is accessible to everyone today. We even wear them on our clothes and accessories.

OMG, isn’t this the truth! 😂Shop the whole collectionhere! 👉 iheartdogs.co/2VfqHmG

Posted by iHeartDogs.com on Sunday, October 6, 2019

Notable Artists Who Depicted Dogs In Their Work

Some of the most influential and prominent artists throughout history created art inspired by our canine friends!

The French Modernist painted a portrait of a Cavalier King Charles Spaniel in the mid-19th century.

The famed French Impressionist saw the natural beauty in dogs.

The renowned artist had several of these hairless Chihuahuas.

This dachshund was a commissioned print Warhol did for Gabrielle Keiller in 1976.

Clearly dogs have always been important to our creative expressions and cultural identities, and I bet that won’t change any time soon.

Over the 2,000 year history of dogs in human artwork, my favorite is still the last overhead picture I took of my dog sleeping on my lap.

The post Dogs Have Been Subjects Of Art For Over 2,000 Years appeared first on iHeartDogs.com.