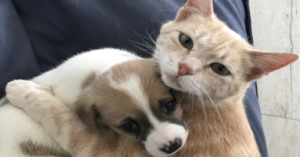 Kathryn is a sweet cat that was found in an empty rental apartment with a litter of kittens. When the new tenants moved in and found her there, they called Langebaan Animal Care in South Africa right away.

Sadly, Kathryn’s kittens did not survive, but Kathryn was perfectly healthy. However, she missed her kittens very much, and she longed for a family to call her own.

Izelle Marallich, the chairperson of Langebaan Animal Care, decided to adopt Kathryn. She knew that this poor cat had a lot of love to give, and she wanted to provide her with a caring environment to help with that. 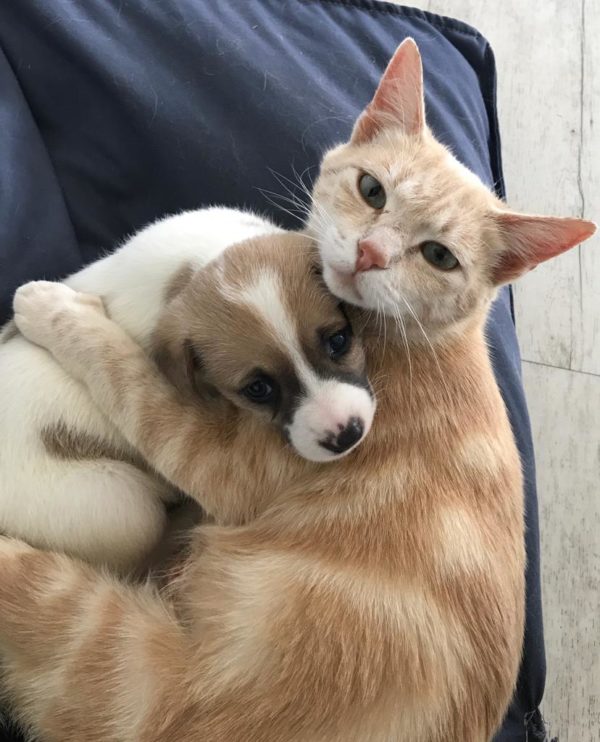 Marallich quickly learned that Kathryn was an affectionate cat. She was not afraid of any of Marallich’s foster dogs, and she always wanted to sleep right beside a person at night. No matter what happened, she always wanted more love.

Sadly, even with all the new people and dogs to love her, Kathryn still missed her kittens greatly. Marallich said that poor Kathryn was often restless, and she would even cry out for her kittens sometimes. At first, her new family had no idea how to make her happy again.

Then, Marallich began fostering a litter of orphaned puppies. These three tiny puppies suddenly made Kathryn’s life so much better. 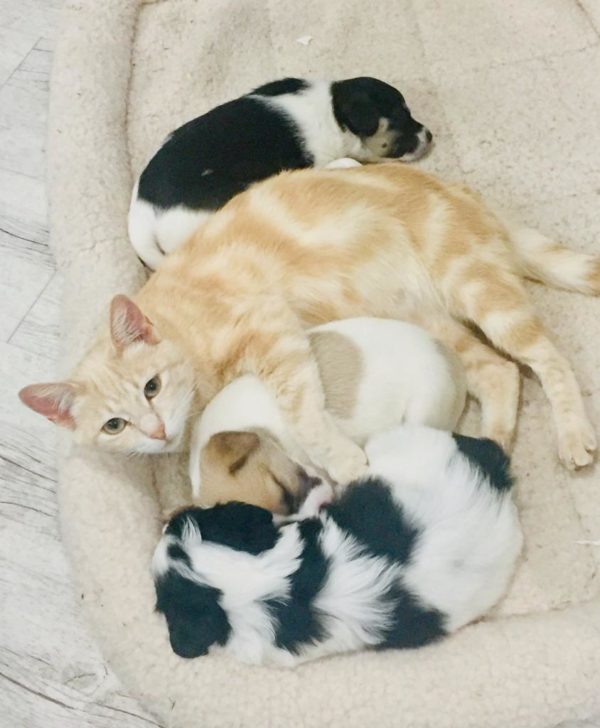 Right away, Kathryn tried to care for the puppies as if they were her own. She would call out to them when they cried for food, and she would lick them to try to soothe them.

“They were a bit confused about it initially and would move away from her, but she was persistent and kept going to groom them,” said Marallich.

Kathryn would follow the puppies around, lick them, and refuse to leave their side. After a while, the puppies bonded with their adoptive mother. Once Kathryn had the puppies in her life, she was no longer restless at night. Both she and the puppies seemed very happy. She groomed the puppies, slept with them, and even let them nurse from her. She became very protective over them and would keep a close eye on them at all times.

“I have never seen such a dedicated and loving mommy,” said Marallich.

All the puppies have recently been adopted, but Kathryn is still a happy cat. She has two orphaned kittens to look after now, so she never has to stop being the loving mother that she is. Her family is grateful that they were able to welcome such a loving cat into their home.

Kathryn’s story proves that a mother’s love knows no boundaries. She was willing to care for any animals in need – no matter what. Hopefully, her story can teach others to be more loving and accepting too. The post Cat Cares for Orphaned Litter of Puppies as if They’re Her Own appeared first on iHeartDogs.com.