Eric Eggert and his dog, Frappuccino (Frappe for short) love traveling together. They enjoy traveling all over the world, and Eggert loves to take pictures in the process. They live in Phoenix, Arizona, but they have visited many interesting places such as France and Norway.

Recently, they were in Florida together to visit Eggert’s family. While it might not have been the most out of the ordinary trip, Eggert and Frappe came across an exciting and adorable situation, which lead Frappe to making a new friend! 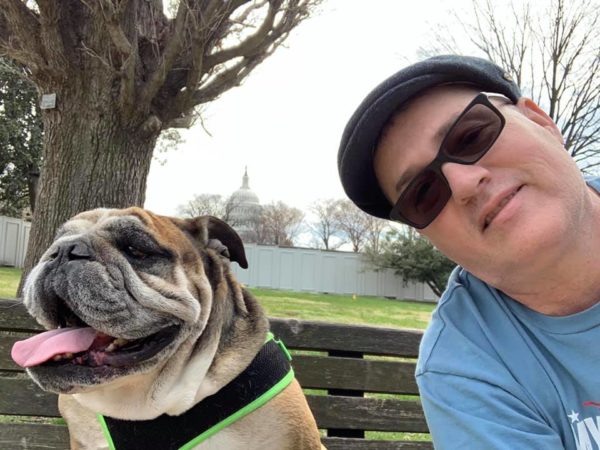 During their trip, Eggert and Frappe decided to go on a kayak ride along one of Florida’s coastal waterways. It was supposed to be just some time to relax. However, it quickly turned into one of the most memorable moments they’ve ever had.

A manatee floated beside their kayak without a worry in the world. Even though manatees are the Florida state mammal, you don’t get to see one up close every day. Of course, Frappe was immediately interested in this large creature.

Frappe stared at the water for a while, and luckily, the manatee came closer. He seemed just as interested in Frappe as Frappe was in him. Eggert got excited too, so he quickly began to film this interaction. 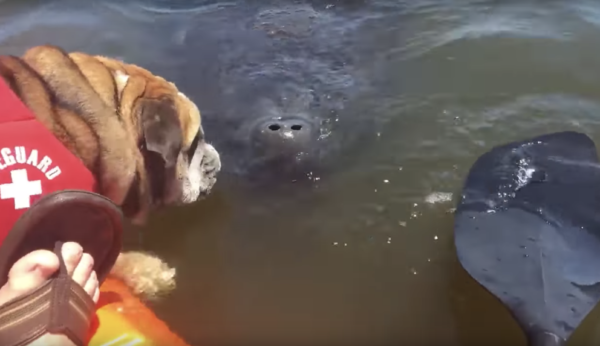 Even though Frappe was clearly thrilled by this large creature, he remained calm and did not even attempt to jump out of the boat. He simply watched  closely as the manatee swam around. Then, the manatee actually came closer to give Frappe an adorable manatee kiss! This heartwarming moment was caught on camera, so it has been shared many times since.

Manatees are large creatures that can grow as big as 13 feet long and can weigh up to 3,500 pounds! However, they are gentle giants. They just love to float around the water, and oftentimes, they act like large aquatic puppies. There are many videos of them playing with boat anchors or coming up to “kiss” humans that are snorkeling. Many people are unaware of how amazing manatees truly are. Therefore, Eggert’s video gives people a glimpse at these incredible creatures. For many years, manatees were endangered even though they have no natural predators. They would often get hit by boats that were going too fast, which is a difficult injury to recover from. However, the manatee population has actually been increasing lately, so as long as humans are careful, this species will continue to grow.

Dogs and manatees don’t seem like your typical animal friendship, but Frappe and his manatee friend prove that a true friendship has no boundaries. If you ever visit Florida, be sure to keep an eye out for this beautiful state mammal.