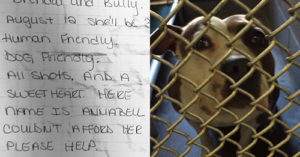 The sad predicament of a pitbull abandoned in Connecticut is shedding light on the costs of raising a fur baby.

The poor girl was found tied to a tree in a park on July 26th with a note attached to her collar. The note, addressed to “Whomever love[s] dogs” explained that the pitbull’s name is Annabell and she would turn 3 years old on August 12th.

She had no tags or microchip when she was picked up by animal control.

Norwalk Animal Shelter in Connecticut shared Annabell’s story on their page where it got a lot of attention. The post received hundreds of shares and several comments from people interested in adopting her.

Soon after, she was transferred to PAWS (Pet Animal Welfare Society) nearby where staff reported that she “can be a tad timid at first, but warms quickly and is sweet and social.” They also learned that she “enjoys outdoor time, long walks and playtime.” 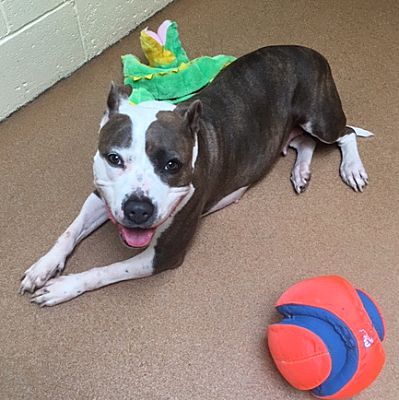 After spay surgery Annabell was adopted by a couple on August 24th! Whether it was the social media attention or one look at her adorable mug that did it, she is now in a loving home.

Annabell’s story has sparked some conversation about the costs of raising a dog.

Many Facebook commenters expressed outrage that someone would abandon a dog like Annabell. In a post, PAWS requested that people not use her story to place judgment on the person who couldn’t take care of her.

“We also hope that rather than taking this as an opportunity to judge, people use this as a springboard for conversation about obstacles to successful pet ownership. These things include vet care that is not affordable, lack of pet friendly housing, breed discrimination in housing, overbreeding, lack of access to training, limited rehoming options and the limitation of adoptability due to breed prejudice and stigma,” the post read.

We’ll do anything for our dogs, but those costs can really add up.

Veterinary students at the University Of Pennsylvania School of Veterinary Medicine Kelly Giffear and Brittany Scott projected the yearly costs of raising dogs of different breeds and sizes. According to Giffear and Scott, the average cost for the first year of raising small dogs was $2674; for medium dogs $2889; for large dogs $3239 and giant breeds like Great Danes have an annual cost of $3536. Across all dog sizes the average first year cost was $3085.

The estimates included the costs of supplies, food, and medical care but not training or boarding. If you’re planning to become a dog parent, make sure you know the costs involved. You can budget for food and replacement toys, but there will also be unexpected costs of boarding or vet visits to cover.

Of course, as most dog parents can tell you, the cost of having a dog in your life is worth it.

If you live near Norwalk but missed your chance to adopt Annabell, check out the other adorable dogs available through PAWS!

The post A Sweet Pitbull Was Found Tied To A Tree. Then They Saw The Note. appeared first on iHeartDogs.com.