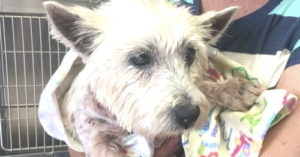 When greed and selfish motives overcome love and compassion, the result is almost always tragic. Puppy mills are one such tragic result of this corruption of mankind. These are horrible places where dogs are forced to breed over and over again. Many of these poor dogs are kept in wire cages for their entire lives, so they don’t even know what it feels like to be a dog – to feel loved. Their health and wellbeing is sadly not maintained, so they’re scared of nearly everything – for good reason.

Sadly, Tiger Lily, or Lily for short, a beautiful West Highland Terrier was one of these unlucky pups. She spent the first 11 years of her life in an uncomfortable wire cage at a puppy mill. Thankfully, after all those years she finally got a new chance at life. A chance to be be loved.

Lily was rescued by the National Mill Dog Rescue, which is a rescue that specifically saves puppy mill dogs. Right after she was rescued, she was brought to Dr. Jeff Young of Rocky Mountain Vet to get cleaned up and receive a comprehensive medical check-up to determine her exact level of health. 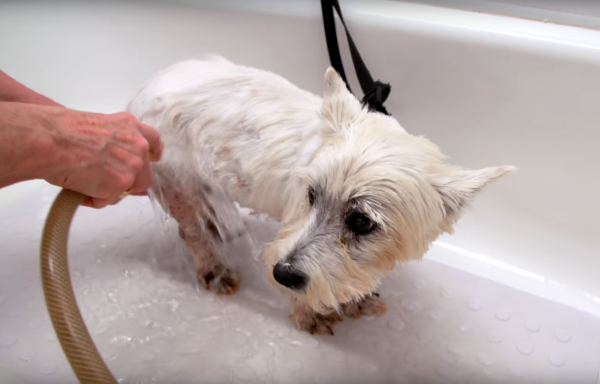 A Tragic Result of Neglect

Right away, the staff noticed sores on Lily’s skin. When they bathed her, they just kept spotting more and more sores, primarily on her belly, neck and feet. In fact, the sores were so bad that they didn’t want to handle Lily too much. After her bath, they decided to gently blow-dry her instead of using a towel. They didn’t want to risk making her sores any worse.

At first, the marks appeared almost like bite marks. However, after closer observation, they discovered that these marks were actually from all the time she spent in a wire cage. All the years in a wire cage had led to cuts all over her fragile body.

“Her whole entire life, her worth has been measured in only one way, and that’s her ability to produce puppies,” said a member of the National Mill Dog Rescue. 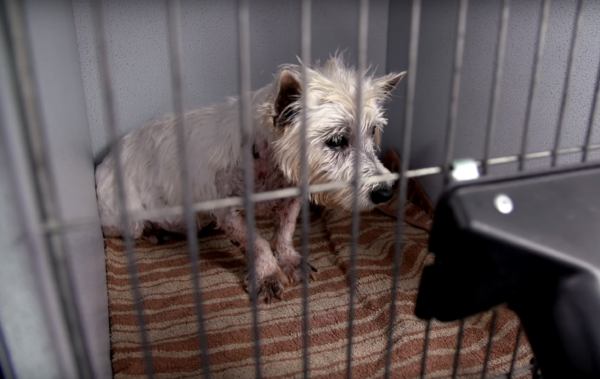 Even though Lily’s in much better shape than she was before, she still has some health issues. So it’s likely that many of the puppies that she had will share these same conditions. This means Lily should never have been bred in the first place, but unfortunately, puppy mills care more about profits than the conditions of the puppies and dogs.

A Bed of Her Own

After all those hard years, Lily was finally cleaned up and free from an uncomfortable cage. At the rescue, she was given her own area with a comfortable bed to lie in. Before that moment, Lily had never even seen a bed before. 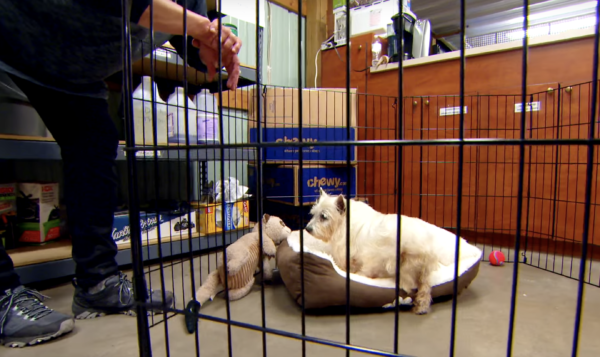 At first, she seemed hesitant about sleeping in a bed, but after some cautious sniffing, she curled up and got comfortable. Sleeping in that bed was likely the most comfortable she’d been her entire life so far. Finally, she found a small piece of happiness in life.

Not long after Lily was posted on the National Mill Dog Rescue Facebook page, she was adopted. Her new name is Maddie, and her family has done so much to make sure that’s she’s both happy and healthy. Her new family loves her so, so much and says that she’s made incredible progress since they brought her home. She is still fearful from time to time, but she knows that she’s now living with people she can trust. People that will care for and love her.

Puppy mills are horrible places that need to be shut down. No dog deserves to go through what Lily went through. Many of the puppies sold at pet stores are actually from puppy mills, but many dog lovers don’t realize this. So be extra careful when searching for your next dog, and if possible, consider opening your heart to a puppy mill survivor like Lily. Check out National Mill Dog Rescue for dogs needing homes or see if there’s a rescue in your area. These wonderful pups need all the love and support they can get. Twice weekly tips to help your senior pup live longer & healthier. Plus get access to our private seniors only Facebook group!

The post After 11 Years In A Puppy Mill, Rescued Senior Dog Finally Rests In A Bed appeared first on iHeartDogs.com.

ALL TIME MOST POPULAR

ABOUT US
All Dogs Lovers is a website that share dog stories, videos, funny and photos... with dogs lovers and community.
FOLLOW US
© 2018 - All Dogs Lovers